If you have read one or many nutrition articles of recent years you would be forgiven for thinking that potatoes are nothing but carbohydrates with no other purpose as a food than converting to sugar, spiking blood glucose and creating havoc to our metabolic systems. Once a proud staple food, it has been attacked by dieters and professors alike, even relegated to the top tier (use sparingly) in an alternative Healthy Eating Pyramid.

You would also be forgiven for thinking of other foods, usually animal foods, as protein.

In food guides, foods are placed into various groups of similar nutrient value and these are usually fruit, vegetables, cereals, dairy and then a fifth group often named ‘protein‘ foods. Here ‘protein’ foods refer to meat, eggs, fish, poultry, legumes and nuts. The UK Eatwell Guide (1), although listing examples, refers to this group as ‘proteins’; the US Dietary Guidelines (2) refers to this group as ‘protein’ and ‘protein foods’; and the US Choose MyPlate as ‘protein’ (3). I note the Australian Dietary Guidelines (4) do not refer to this food group as ‘protein’ but rather lists the foods within the group ie: meat, poultry, fish, egg, tofu, nuts, seeds, legumes/beans. The Australian example aside, such messages of ‘protein’ as a food group from nutrition authorities in the UK and US, has a flow-down effect to health professionals and the public and this theme of ‘protein’ as a food group is common in the lay-press. One could mistakenly assume that those foods (meat, eggs, fish, poultry, legumes, nuts) are solely or predominantly protein; and that cereals, grains, tubers, potatoes, vegetables and dairy foods (which appear in different food groups) are thus low, inferior or poor quality sources of protein. Neither assumption is correct. .

Foods are often thought of as ‘carbohydrates’ or ‘proteins’ or ‘fats’. However, with some rare exceptions (5), foods are not solely one macro-nutrient but rather mixtures of protein, carbohydrate, fat and water. In point of fact, some foods often thought of as ‘protein’ (eggs, cheese, fatty fish, nuts, some meats) have a higher percentage of their energy value derived from fat. On the flip side, foods often regarded as ‘carbohydrate’ (potatoes and cereals) have moderate levels of protein. As they are generally eaten in large quantities, they can substantially contribute to protein intake. In some traditional cultures these are regarded as staple foods providing a high percentage of overall protein intake.

Returning to potatoes and the false assumption that they provide only carbohydrates … potatoes provide high quality protein in sufficient proportion that if eaten in sufficient quantities to fulfill energy needs, potatoes alone would provide enough protein.

Here are some key facts about protein and potatoes …
(references are given in detailed section below).

Proteins and amino acids in foods

Proteins are complex structures comprised of long chains of amino acids. The body breaks down food protein into amino acids during digestion. After absorption, the amino acids are ‘reassembled’ into the desired body proteins for a variety of functions such as muscle mass and other body tissues, enzymes and hormones. There are twenty amino acids required as the building blocks of body proteins and eight of these (nine in infants) are considered essential and must be obtained from the diet. Protein quality and availability in food is dependent on many factors including protein digestibility, the presence or absence of certain factors that may interfere with absorption, and the proportion of essential amino acids in the food proteins. Requirement depends on age, activity level and general health. (6)

The World Health Organisation (WHO) provides guidelines on a considered safe level of protein intake (7) – that is; daily amounts required to provide maintenance of body tissue in adults and growth in children. The safe level of intake for adults over 18 years is 0.83g per kilogram a day which translates to ~33 to 66 g per day, depending on weight. 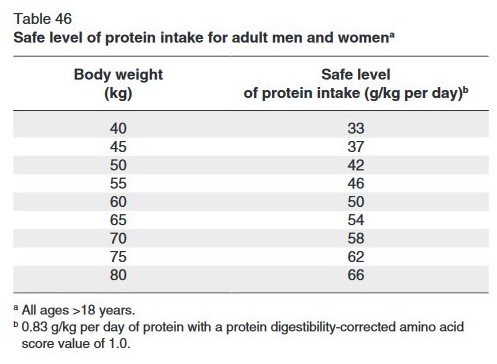 The Australian National Health and Medical Research Council (NH&MRC) Nutrient Reference Values provide a guide for an Estimated Average Requirement (EAR) and a Recommended Daily Intake (RDI) relevant to the Australian context. (8) The EAR is the estimated daily intake in healthy individuals to meet requirements of half the people in a particular life stage and gender group; whereas the RDI would meet the needs of 97-98% of each group. EARs range from 37 – 46 g/d (women), 52-65 g/d (men) and RDI range from 46-57 g/day women, 64-81/day men as given in Figure 2. Recommendations for infants, children and pregnant women and lactating women can be found at this link. (8) 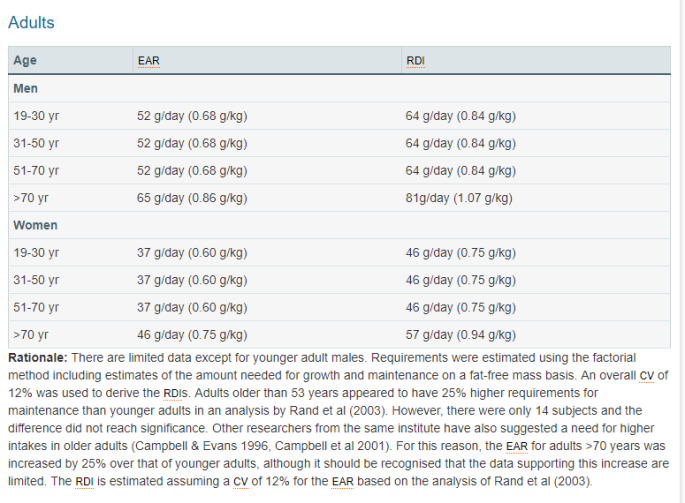 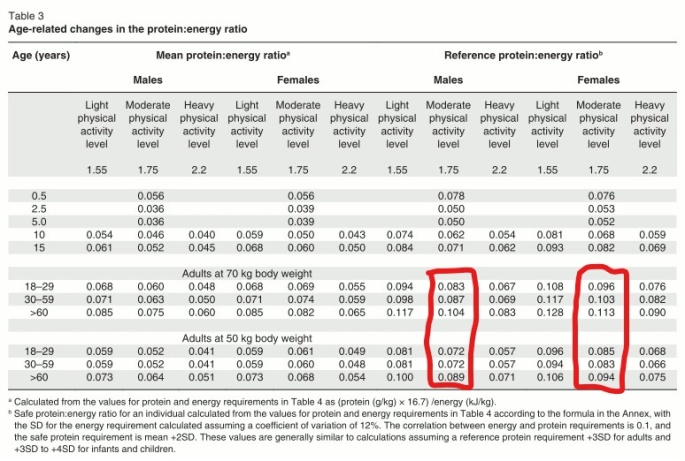 Figure 3 from WHO sources (7), provides mean and reference protein:energy ratios. The latter is considered a safe level of intake. I have highlighted the reference for those with moderate activity. From the data in the table, males aged 18 to over 60 years, a safe protein-energy ratio varies from 0.072 to 0.104 (7.2-10.4% of total energy derived from protein). For females it is 8.3-11.3%. A slightly higher percentage is required for sedentary individuals (8.1 – 12.8%). This is because sedentary people require relatively the same protein but less overall energy. Thus the protein-ratio needs to be higher. 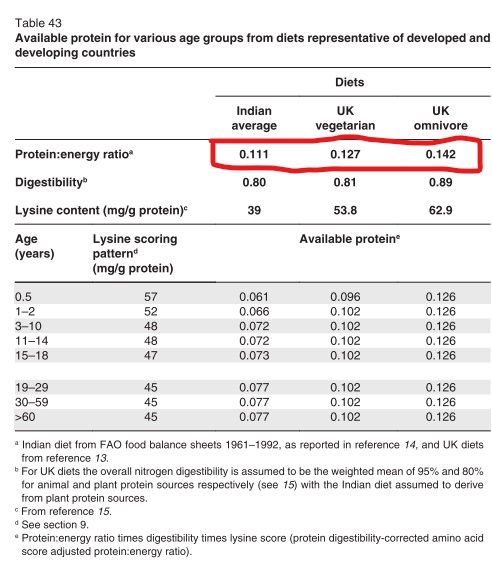 In the 1930s-70s, due to reported cases of malnourished infants in Africa, the Food and Agricultural Organisation described a global deficiency of protein and set recommended levels of protein intake at high levels. The assumptions this was based on were later found to be incorrect. Even though protein deficiency in the presence of adequate calories can occur, this is much rarer than the more common cases of malnutrition due to deficiency of calories ie: lack of food. It was discovered provision of additional calories to malnourished children, corrected the malnutrition. The incorrect assumptions spanning four decades is known as ‘The Great Protein Fiasco’ (13). This led in the 1970s to a massive recalculation of protein requirements and a drop in recommended protein-energy ratios. Nevertheless, the assumption we require high levels of protein persists.

In terms of foods, animal food protein sources such as egg, meat, fish and poultry; as well as soy and legumes are considered ‘protein foods’. However, cereals, and starchy vegetables provide protein above WHO reference values for a safe protein intake. I have calculated average protein, energy and protein-energy ratios of selected foods and tabled them in ascending order of protein-density, including five potato varieties. This is summarised in Figure 5. The detailed list with calculations are provided as Ref (14). 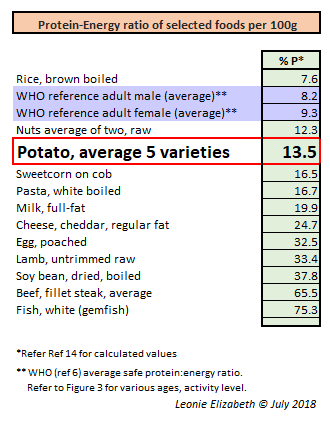 The protein-energy ratio in the five potato varieties varies from 7.1 – 15.9% and averages 13.5% (Figure 5). This is above the UK vegetarian intake (12.7%) and a fraction below UK omnivore (14.2%) intake. It is above what is considered a safe level of intake (7.2 – 12.8%) in WHO guidelines, even for sedentary individuals. In other words, if you ate only potatoes (and I am not suggesting that you should), as long as you ate enough potatoes to supply energy needs, potatoes alone would provide enough protein. For example a daily intake of 8000 kilojoules in potatoes (about 3100 g or 21 potatoes) would provide approximately 65g of protein which is above daily EAR for Australian adults and above RDI for adults aged 19-70. (Elderly adults are recommended slightly higher levels). Such a high level of intake of potatoes is possibly unrealistic, although historically potatoes provided a higher proportion of daily food intake than today, for example in Ireland. In some traditional diets potatoes provide a substantial proportion of protein and energy (15). In many countries cereals provide a high proportion of protein in the diet. In the PURE study on 18 countries; cereals dominated as main protein source in lower income countries; and middle-income nations had a mixture of cereals and animal-based foods as major protein sources. It was only in the high income nations that animal foods became the top five sources of protein. (16) 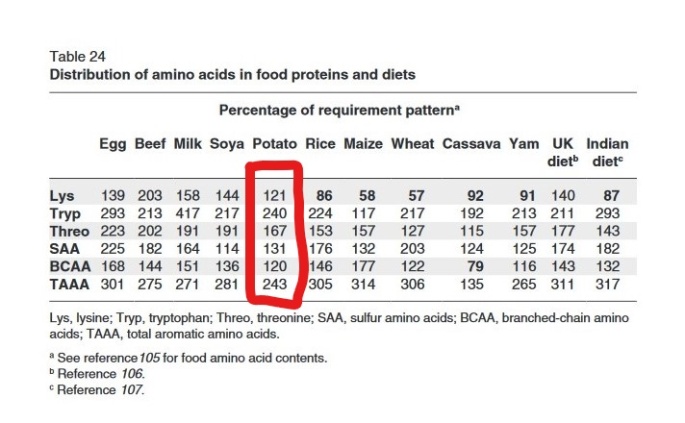 The protein-energy ratio in potatoes varies from 7.1 – 15.9% and averages 13.5%. This is above the WHO reference value of a safe level of intake (7.2 – 12.8%) even for sedentary individuals. It is above the UK vegetarian intake (12.7%) and just a fraction below UK omnivore level of 14.2% (7). Potatoes provide high quality protein. In other words, as long as you ate enough to supply energy needs, potatoes alone would provide enough protein.

And while you are getting enough protein … you would also be getting substantial amounts of vitamins and minerals.

This is a series of posts on staple foods: 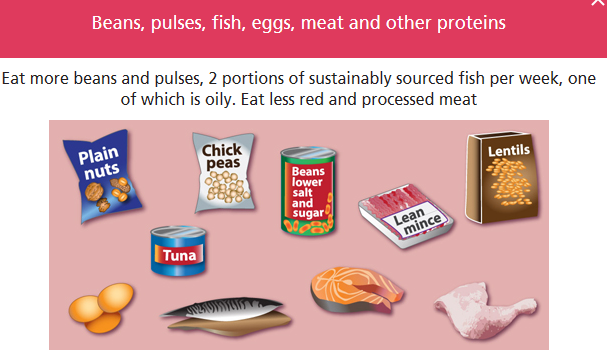 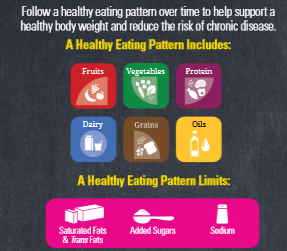 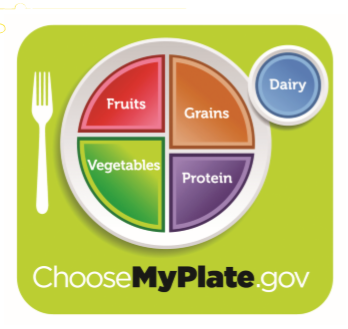 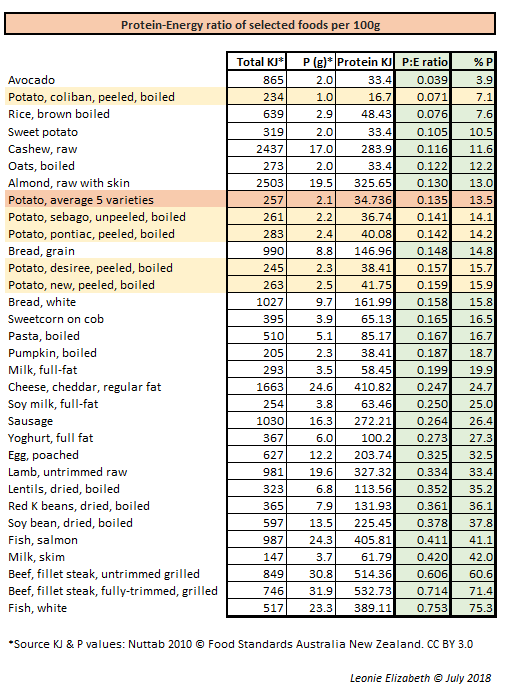